COVID-19, the HOsiHO agency has put together an audiovisual collection of more than 4000 aerial videos on confined cities

Publication and reproduction authorized without prior notice

In mid-March 2020, at the very beginning of the containment, the French agency HOsiHO, a bank of aerial images of the World seen from above, and a national network of UAV telepilots, launched a vast operation to collect aerial and ground images showing the multiple aspects of confined cities around the world.
Its appeal to UAV telepilots and aerial filmmakers contributing to its collection of more than 30,000 images solemnly stated the following:
" In these uncertain times, we visual creators must continue to produce images for history.  The world will need them to remember and explain."
Most of the artists immediately grasped the historical moment we were living through, and immediately set about filming Absence in Confined Cities, while respecting the health and air regulations of the countries where they were working. For the agency's principle is first and foremost to offer only aerial images taken legally with all the required authorisations.
In 45 days, the 200 authors who make up the HOsiHO agency have therefore undertaken to film their regions and their often deserted cities. In France, Europe and the United States.
Thus, these images, historical in more than one way, show the absence and emptiness in streets, squares, avenues, parks and gardens, shopping malls, tourist sites, beaches, cathedrals, churches, airports, train stations, markets, schools, highways, etc...
They make one feel the heavy and forced silence of the confined cities, through images.
The calm and anguish that paradoxically go together for the occasion.
They also show the relative collective respect of this constraint on citizens, deprived of spring, work, walks, holidays, schooling.
At the beginning of May, the Covid-19 collection initiated by HOsiHO, already includes more than 4000 videos and aerial photos on 65 cities in France and in the World, confined because of the epidemic due to the coronavirus.
Here is the non-exhaustive and constantly evolving list of the cities in HOsiHO's Covid-19 gallery:
London, Paris, Athens, Los Angeles, Miami, Fort Lauderdale (Florida), Warsaw, Bucharest, Stockholm, Visby (Sweden), Lille, Marseille, Bordeaux, Montpellier, Toulouse, Metz, Tourcoing, Roubaix, Valenciennes, Dunkirk, Vannes, Brest, Aix-en-Provence, Rennes, La Rochelle, Ile de Ré, Limoges, Belfort, Morlaix, Reims, Colmar, Blois, Lisieux, Deauville, Amiens, Douai, Lorient, Nantes, Strasbourg, Saint-Malo, Romorantin, Caen, Rouen, Bayonne, Avignon, Lyon, Coutances, Narbonne, Quimper, Landerneau, Perpignan, Arles, Beauvais, Béthune, Mont-Saint-Michel, Lens, Calais, Boulogne-sur-Mer, Arras, Saint-Emilion, Libourne, Carcassonne, Béziers, Pointe-à-Pitre, Fort-de-France, Reunion Island 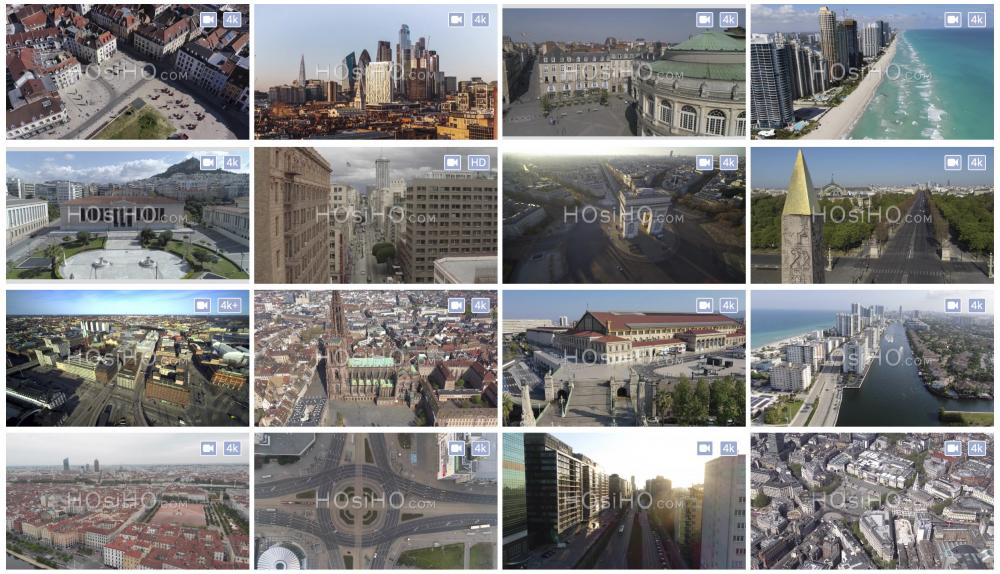 Part of the French cities were flown over by the 15 operators of the national network of UAV pilots, founded in 2017 by the agency and named HOsiHO Drone Network. A collective clip, La France en Absence, was even taken from their entire production. It shows 21 confined cities filmed by their UAVs in April 2020.
These same drone pilots, located in every corner of France and Martinique, also took the measure of the historic day that was May 1st, 2020.
A day on which traditionally the parades of trade unions hit the ground in all major cities.
This year, as no parade was allowed, the streets remained deserted and this is precisely what the HOsiHO network wanted to immortalize in pictures.
Through an exceptional system set up in eleven major cities, the HOsiHO network of UAV operators was able to capture images that will remain historic: those of a confined May Day, where parades were banned due to the global pandemic caused by Covid-19.
In addition to their final destination in the image bank, a complete set of images was made available to the press and media from 5:30 pm, for immediate release that same evening and the next day.
See all the details and a compilation of the rushes on the network's blog.
The drone images of a Labor Day morning without any parades in 11 cities, are already online.
As part of a global partnership between the INA and the HOsiHO agency, part of this Covid-19 stock images are already distributed by the Institut National de l'Audiovisuel.
The INA will add to its catalogue, in May 2020, a large part of HOsiHO's aerial footage collection (Covid and non-Covid).
HOsiHO being one of the prestigious partner collections represented on the professional platform inamediapro.

The aerial image bank, on HOsiHO.com

Created in 2014 in Marseille, the HOsiHO collection has more than 33,000 videos and aerial photos on the World seen from above. The agency's e-commerce platform, accessible on HOsiHO.com, allows searching, sharing by viewer as well as the acquisition of rights for immediate downloading of the images in high-resolution (HD/4K+).

Created in 2017, it is a service to put clients in touch with reliable and talented drone providers, all coming from the authors signed by the image bank. Thanks to a dedicated website, on HOsiHO.net, it is easy to quickly find the nearest UAV operator to the shooting sites, by a simple click on the map of France. HOsiHO labeled, these operators are all long time recognized professionals.